Shower The People in the News!

“They’re always like ‘how did you fit that in the school bus,'” said Meredith MacLeod Jaulin of Shower The People.

On board a converted school bus, once used by a church, Shower The People installed two walk-in bathrooms. The bus is about six feet tall inside at it’s highest point, so the nonprofit added domes to the shower stalls for more headroom.

“We wanted to make sure people weren’t squatting the whole time they’re in there,” said Russ Arnold of Shower The People. “It’s a pretty roomy shower and we also have sinks and toliets because we were thinking we want people to be able to come in and take care of everything they need to while they’re there.”

About 500 people have used the facilities since the bus launched a few years ago.

“This is really something Nashville needs. We’re this up and coming city and should be able to take care of our people, and if we’re not doing that with simple things like hygiene than what are we doing,” MacLeod Jaulin said.

MacLeod Jaulin is a licensed social worker. She said Nashville only has about fifteen public showers for the homeless population to utilize.

“A shower means so much to your day. You’re clean, but you feel better about yourself. You’re able to go out in society and not feel like you’re worried about how you smell or how you look,” Arnold said.

The bus is also stocked with tolietries, socks and underwear for guests. They even try to fill requests.

“If we know somebody has a size 14 shoe, we’re going to put out an ask for that so next week we have their size 14 shoe,” MacLeod Jaulin said.

The nonprofit is in the process of budgeting for a laundry facility. Oftentimes, people throw their clothes away after they shower because they are dirty. 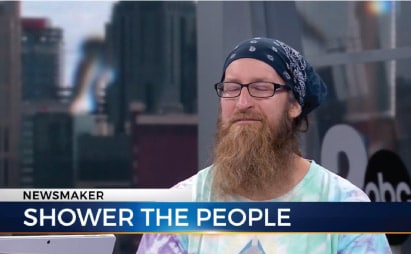 NASHVILLE, Tenn. (WKRN) – Having a place to take a shower daily is something many take for granted but for thousands of people living on Nashville’s streets, finding a place to shower at all is very difficult.

That’s where “Shower the People” comes in. It offers a chance to clean-up three times a week. But those behind the charity say it’s about much more than just the physical effects.

NASHVILLE, Tenn. (WTVF) — Shower The People is a nonprofit organization busing showers to Nashville’s homeless population.  “They’re always like ‘how did you fit that

NASHVILLE, Tenn. (WKRN) – Having a place to take a shower daily is something many take for granted but for thousands of people living on